Freemasonry is an organization of men who are banded together in a dignified common purpose of making this a better world by which to live in, becoming better men, men of character, men of courage, men of conviction, men who follow Masonry and its teachings, men who in their daily lives are projecting by their leadership and example true brotherly love, relief and truth. 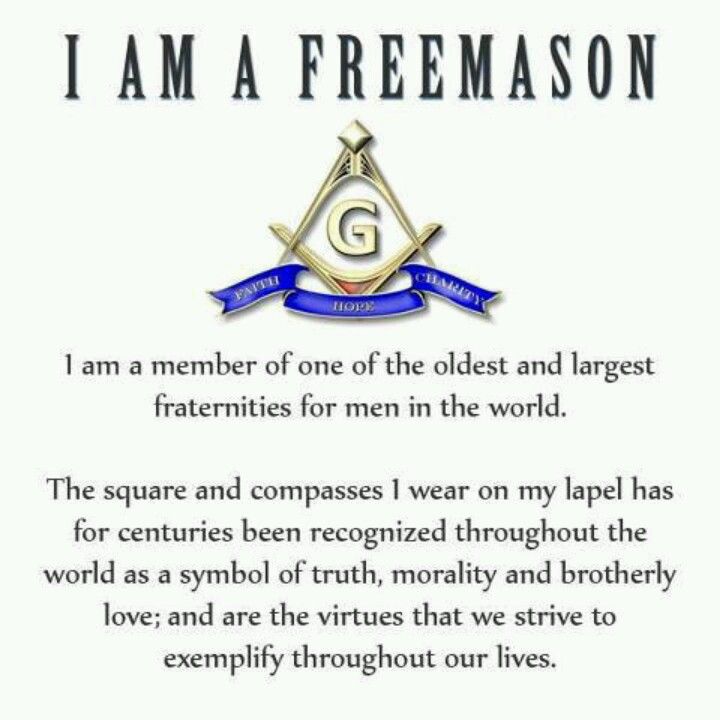 Freemasonry is a society of men, which derives its origins from medieval operative masons. In those days most would be unable to read and; hence they developed modes of recognition, which were given only when skills had been learnt. This enabled them to travel from site to site and prove that they had certain proficiency. To let the untrained have access to those signs of recognition would be the equivalent of giving them a certificate to which they were not entitled. Today those ceremonial methods of recognition are retained with a similar refusal to give them to non-members. In olden days the masons would demonstrate brotherly love, relief and truth, and today we follow that example in today’s language – friendship, charity and integrity.

The ceremonies during which the different modes of recognition are given teach how we should behave to each other and the world at large. Masonry teaches its members that their first duty is to their families and its connections, that they should be honest friendly and proper in their conduct to everyone. They are urged to be good citizens, obey the law and maintain the good order of society. Members who fail to live up to those high standards may in appropriate cases be asked to resign or be expelled.

Freemasonry is a multicultural organization. Members of all races and faiths are welcome to join. It requires that its members should believe in a deity and no man can become a mason unless he does so. He will be required to take certain obligations with his hand upon his religion’s sacred book. Freemasonry does not concern itself with which religion a member follows but urges a member to follow the teachings of his own faith. It is a requirement that topics of religion or politics should never be discussed in Lodge.

Freemasonry is not a benefit society. It offers no pecuniary advantage or reward nor does it require its members to support one another in business or employment. The organization does have charities for those Freemasons and their families who were once self-supporting, but through misfortune are now unable to do so. It also has a Charity, which supports causes unconnected with its membership. All money paid to these charities is from private donations from its members. Freemasonry does not solicit donations from members of the public.

No one should join Freemasonry unless he can afford to pay the expenses involved, without affecting his ability to support his family. These expenses include the joining fee, the annual subscription and a regular donation to charity. In addition, most meetings are followed by a dinner or supper. The actual costs vary from Lodge to Lodge. He should have discussed the prospect of his becoming a Freemason with his wife/partner and be satisfied that she is supportive of his application. He should not put his employment at risk by becoming a Freemason.

Anyone thinking of becoming a Freemason should be satisfied in his own mind that he desires the intellectual and moral improvement of himself and his fellow citizens; that he is willing to devote part of his time and money to promoting fellowship, charity and integrity and be able to afford it without affecting himself or his family’s commitments; and that he seeks no commercial, social or pecuniary advantage by wishing to join.

Freemasonry is a voluntary organization and it is up to a would-be member to ask to be considered for membership. However, it is not improper for a Mason, once only, to suggest to a man who he considers could be a good member, that he might give some thought to the idea.